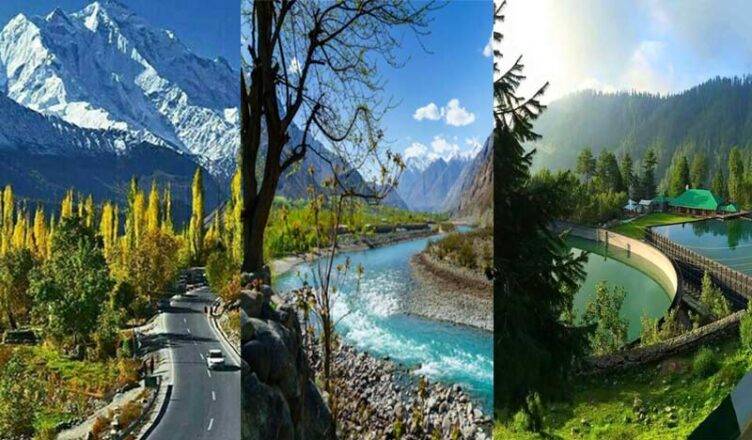 Tourism, an act of traveling is a passion, a profession, a hobby, and a business also for people around the world. With the word ‘Tourism’, the thought that instantly comes to the mind is ‘traveling for fun’ but it is much more than just staying in hotels, restaurants, etc. Tourism is vital for the economy of the country as well. It contributes to employment creating thousands of jobs, enhancing our businesses, creating a connection between foreigners and the country people through their customs and tradition, promoting their culture, etc. For some people, tourism is only escaping from their workaholic routine, from all the tensions and problems of their stressful life. Tourism can also be considered as traveling to enhance physical and mental health, known as wellness tourism.

Pakistan, the fifth most popular country in South Asia, is one of the most spectacular tourist destinations. Ranging from high mountains, green luscious valleys to the vast plateaus and deserts, Pakistan is an epitome of natural beauty. Economically, it also contributes a respectable amount to Pakistan’s GDP (Gross Domestic Product). In a country with so many adventurous spots to choose from, some of the best are described here which are mandatory to visit.

Another name for Swat district is “Mini Switzerland”. Swat is located at the foot of Hindukush mountain ranges. It is famous for its breathtaking scenery including waterfalls, snow peaks, glaciers, meadows, etc. It contributes majorly to the tourism industry. Swati people are also famous for their friendly behavior, which is yet another reason to visit Swat.

The word has it ‘If you haven’t visited Hunza during your Pakistan tour, you have visited nothing’. Hunza, a peaceful valley, is a mountainous area in Gilgit. It is more likely to be visited in autumn because in this season whole valley is covered with fallen leaves, flowers, and snowmaking it more attractive with sparkling colors all around. It is one of the reasons why it is called ‘Heaven on Earth’. Another name of this valley which is given by the tourists is “Fairy Medows”, because of its starry nights.

This enormous, green, the most scenic place of Pakistan, is located in the Mansehra district of Khyber Pakhtunkhwa. This valley is famous for its renowned lakes. Once called as a meeting point of the lovers, Saiful Muluk Lake, is one of the highest lakes of Pakistan and is considered as a lead attraction of the whole valley. In the upper Kaghan valley lays another peaceful village Naran. The best time to visit this valley is in winter.

It is a state full of lush green lands, striking mountain peaks, and charming valleys, making it the most breath-taking city of Pakistan. It has great potential for tourism due to its eye-catching sites. Neelum Valley is the greatest and most beautiful valley in Kashmir. It was named after the Neelum River. People prefer to visit this city in summers rather than winters due to the risk of heavy rain and flood.

This place is known for hiking tracks and its pleasant weather. Nathiagali is a mountain resort between Murree and Abottabad. The main attraction is Nathiagali restaurants, hotels, making it the best place to stay. One of the famous resorts is Shimla resort with its lovely garden and a terrace. It tempts travelers with trails of alpine, forested peaks, and broad views over Pakistan.

It is a known tourist destination for local tourists in Balochistan. Ziarat valley is famous for its world’s second-largest forces of ancient, emerald green juniper forests. This city is ideal for trekking and hiking as it contains many high mountain peaks. It would not be wrong if it is said that Ziarat is the most beautiful district of Balochistan.

Tourism is not only visiting, capturing and enjoying green luxurious places; it is also to discover, to learn, and to visit the historical places of the country which helps to understand the country more closely. Pakistan, being the country of nature, is also a place of historical places that are known worldwide. Some of the most visited ancient places are described here.

It is one of the most ancient and famous places in the Indus Civilization of Pakistan. Harappa is an archeological site. Tourists, who are more interested in discovering the history of the country, would surely visit Harappa. One of the famous among these towns is Mohenjo Daro, which is famous for its monuments, and are now presented in the Museum.

The city Lahore has a castle which relates the modern era to the Mughal empires, named as Lahore Fort. This fort contains many notable monuments some of which are from the era of Emperor Akbar. It has a trail of noble palaces, halls, and gardens, exhibiting the former culture of the Islamic Republic of Pakistan. The famous Sheesh Mahal (Place of Mirrors) is located within the fort. It is one of the monuments and forms ‘ jewels in the Fort’s crown’.

While traveling from the Islamabad-Rawalpindi metropolitan area, there shines the elevation of the famous monument, the Pakistan Monument. It is national as well as a heritage for the people of Pakistan. It represents the sign of unity and is dedicated to the people who sacrificed their present for a better future. It is a popular tourist destination in Islamabad.

It is also known as the ‘Palace of Lights’. The Noor Mahal was constructed by four queens of Nawab Muhammad Sadiq. The glory of this palace has made it one of the top tourist places. It is owned by the Pakistan army, situated in Bahawalpur.

As rich as Pakistan is, in enchanting sceneries and ancient monuments it has and the present contribution of tourism to Pakistan’s economy, it still has to go a long way ahead to take full advantage of tourism. We should have taken some serious majors like opening of proper restaurants with proper supply of electricity, technology and water in all the places to visit either it’s a village or a town.