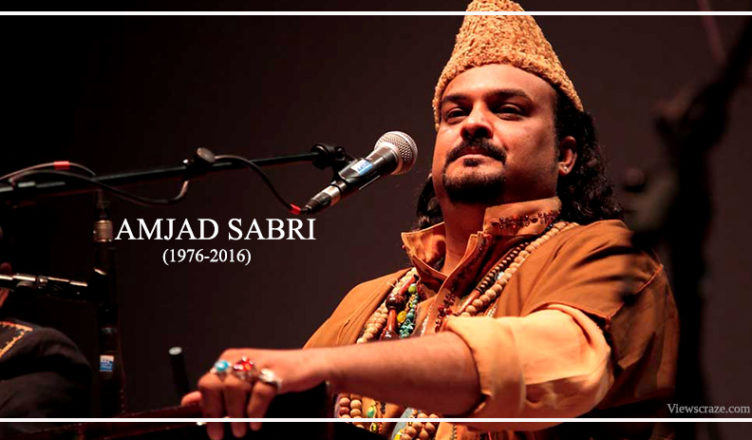 The most famous and respected Pakistani Sufi singer Amjad Sabri has been shot dead by two men on the bike in Karachi. No doubt, this news shocked each and every person of Pakistan because they have lost another legend of this country. Karachi, the city once famous as the city of light is completely drowned in the darkness of crimes and murders of innocent people. Unfortunately, a lot of people lost their lives in this city on daily basis that has also destroyed the image of whole Pakistan on the international level.

Recently, the 45 years old Amjad Sabri; a renowned figure of Pakistan has been killed brutally. Amjad Sabri was famous for his devotional songs all across the globe. According to media, Qari Saifullah Mehsud (leader of Pakistan Taliban) claimed responsibility for the killing of Sabri was done because they believe that his music blasphemous. The media has reported that killers have fired six bullets on the car of Sabri, and the bullet that hits his mind become the reason of his death on the very spot.

The songs Amjad Sabri performed are the part of Sufi culture known as Qawwalis, steeped with magic and often based on spiritualist verse. His songs are the key part of the profound existence of a large number of Muslims in south Asia.Basically, the Sufi tradition was started in the 13th century that highlights the Islamic moral and religious values perfectly.According to human rights activist Ali Dayan Hasan:

“The killing of this amazing artist from an acclaimed and well-loved musical dynasty is also the warning for all of us that don’t speak about Pakistan’s indigenous traditions openly. And, none of us is safe in this country.”

From a long time, Qawwalis have been censured by the Taliban and other communities that reject all music as un-Islamic, and especially object those songs that highlight the life of the prophet Muhammad. Sabri had been named in blasphemy case brought by a traditionalist legal advisor over a TV performance of one of his songs two years back. Friends, colleagues and fans impugned the Taliban for focusing on a man who dedicated his life and work to religion. Another famous Sufi Artist said:

“Our beloved Amjad Sabri … was a true lover of God, life and all that is great…”

Karachi, where 20million population of Pakistan living is tormented by political, culturaland sectarianbarbarism. Recently in 2013, Government has started a mission to clear out all the criminals and militants groups; the root cause of all the violence in the city, but unfortunately it is growing more day by day in the form of target killing of innocent people. Last April, Sabeen Mahmud who was an active scholar and cultural leader was also murdered. Moreover, in the month of May, Khurram Zaki, a rights activist and renowned critic of radical Islamists, was also shot dead in Karachi.

The death of Amjad Sabri is a lesson for all of us that this is the high time, when we should stand up for ourselves. Our lives are not cheap that anybody can snatch it from us. Pakistan is the country that has huge talent, so being a Pakistani; we should raise our voice for the security of our legends.