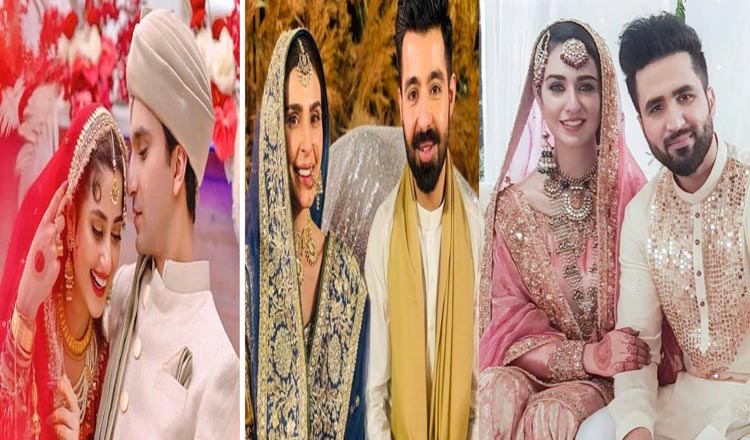 The year twenty twenties, also being the leap year, started magnificently bringing all the joys and happiness with it. Surprisingly this year kick off with the melodious ringing of wedding bells, social media filled with several different attractive and appealing invitations of various colorful wedding events including all desi functions and gatherings, full of lively and energetic people. This year was not about the wedding of ordinary people it was about Pakistani celebrities getting married to their perfectly chosen life partner and also about how it is beneficial to keep the wedding a low profile, finally setting up a good example for us. Some of the well-known and most favorite couples who tied their knots this year are:

This was the most awaited celebrity wedding of this year. Since the drama ‘yaqeen ka safar’, where they were the lead characters, they became inseparable and had the most unique chemistry that none other had. This is the best duo since then. As sophisticated as they were, they suggested to keep their wedding profile as low as possible and did not announce the wedding date or any wedding event until they posted their beautiful pictures as bride and groom. People were astonished to see the photos because they were curious to know about the event. They vowed to live together forever on 14th March in UAE.

The most unexpected couple of 2020 was this charming couple of Falak and Sarah. Their love story started in 2019 during a modeling show where Falak fell in love with Sarah and instantly decided to make her his wife without wasting a year in between, that fast. They celebrated their wedding ceremony with much enthusiasm and get nikkahfied in July while sitting in front of each other with a veil of flowers in between. Their wedding was a true story of ‘Gunshot wedding’.

Since the moment their relationship has begun, fake wedding news was posted now and then, it seems like they were meant for each other from the beginning. They started their joyous wedding with the proper function of mayo and opted for the day wedding following the trend. Sadia despite following the desi-trends for her functions, did not choose them for her dressing either in Barat or valima.

Unlike others, they attempted a private ceremony on Valentine’s Day 2020. Armeena and Fesl disclosed their wedding news to their fans through an Instagram post, fans were disheartened as they were expecting to see their beautiful pictures. Not to break their hearts Armeena assures them about having a formal reception soon which is not finalized yet.

This charming, decent boy believes in the saying that ‘Love is friendship’, and tied the wedding knot with his best friend Misha Chaudhry. They arranged every event to make their wedding full of life. This couple got engaged two years back and expected 2020 to be amazing as they had planned to get married at the beginning of the year.

How can we forget about them? They were the most discussed, posted and truly unexpected couple of the year, this was Shehroz’s second marriage after all. Fans were very discouraged by the news of his divorce with Syra since she and Shehroz were an adorable couple. But besides their family problems which Sadaf was not part of, the second wedding comprises of nikkah ceremony only. After which Sadaf instantly changes her name to Sadaf Sabzwari.

Yet another amazing and beautiful wedding was arranged at the beginning of the year. Eman a famous model and actress tied wedding knots with her long term admirer Jamil Rizvi in a grant wedding ceremony. Although she always wanted to have a simply elegant wedding, her elders did not agree on that and decided otherwise. But to her, it was not an issue since she still got the chance to flaw her unique dressing style.

After these many weddings the whole world is now suffering from a pandemic, but still, fingers are crossed for more invitations that are to come in the following months.