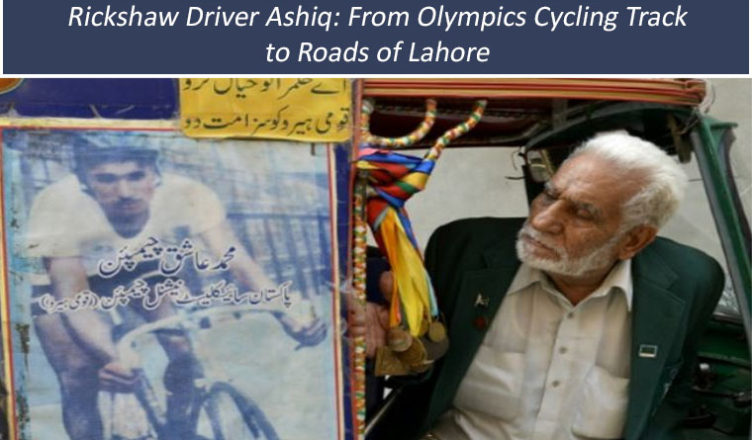 Former Olympian Muhammad Ashiq who won the fame and a lot of medals for the Pakistan is working as an Auto Driver. This is a big shame for Pakistan that the former legend is living such a miserable life. He won trophies in a glittering cycling career for his nation, but he laments that the majority of people think that I died. The corrupt system of this nation removed my existence and I am living such a pathetic life. He more added tearfully:

“I still remember the time when I used to shake hands with former Prime Minister, Presidents and Chief Executives of Pakistan. Time has changed and people forget me and thinks that I am no more in this world. There is nobody to appreciate my distribution for this nation and this makes me awful.”

I wonder sometimes that how they all forgot me. I cannot believe that I compete for this country and they forgot me like I was nothing. I participated in 1960 and 1964 Olympics and currently driving rickshaw to survive. Basically, Ashiq started his career as a boxer, but later on, he started cycling. His wife is no more in this world, but he actually switched his career for the sake of his wife. His wife used to complain about his injuries when he was a boxer, so he decided to quit this game. In 1960, he competed in Rome and then in Tokyo in 1964. He was considered as the national hero of Pakistan that time, though he has won no medals. He said:

“It was an honor for me that I represented Pakistan in the Olympics. However, when my career ended, so my luck too.”

He also did the job besides cycling, but due to his critical health condition; Ashiq left it in 1977. He drove taxi and van for sometimes, but now he is earning by driving rickshaw in the old streets of Lahore. He is living in a small house and roughly earn 400 rupees per day. His wife is no more in this world, and the saddest fact is that his kids also left him. He said that he himself even don’t want to be a burden on his children. A few years back, he used to hand his medals in his rickshaw but now he thinks that there is no more respect for any legend. He also said:

“Nations who don’t respect their heroes can never be prosperous. We need to change our perceptions and way of standards to achieve a grand position in this world that seems impossible.”

Lastly, he just added that I just want to meet my wife after death. She was loyal to me and I am incomplete without her. She was the one who always got worried for me and supported me in every phase of my life. I wish to leave this world because it is difficult to live such pathetic life all alone.