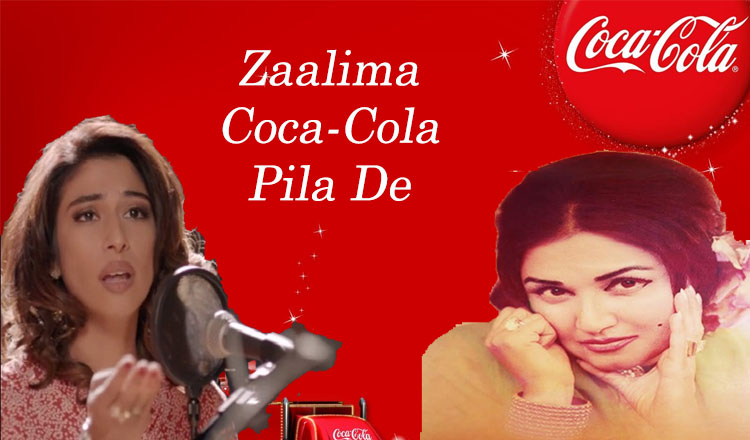 Coke ads had always been unique and effective in the history of entertainment media. From the very first ad of the company “Open Happiness”, all of the coke ads had bought different and comforting messages to its customers. The motto of the company in the creation of the ads has always been to promote social harmony and to raise voice against bullying.

Afterwards there was another idea “Share A Coke With” was introduced by the company. This once again leads to the building of peaceful harmony and the concept of social sharing among people.

But now, here we have another ad by Coke productions and it says;

In this ad, there is an important role played by MeeshaShafi and UmairJaswal.  The theme song is actually Noor Jahan’s song “Zalimaa Coca Cola PelaaDy”. In this ad we see a number of musicians and singer trying to compose a new song for Coke Studio’s new season and by mistake the studio goes on air and their “just for entertainment” activity song is heard by millions of people.

The effect of this ad can clearly be seen in the ad as well. It is shown that how after just listening to that on air Coca Cola song more and more people starts asking for Coke. Although everyone’s way of asking for a Coke is creative and different from others. Even the old shopkeeper is seen amazed at the way his customer is asking for coke.

The harmony in this ad even is built by the idea of sharing the Coke with each other. We see different people sharing coke, even the students who don’t know each other are also seemed to be caring and share their coke.

The song ends with the scene when the band realizes that the song has gone on air and MishaShafi drinks Coke too.

Apparently, there isn’t much in this ad as it just plays a song in which everyone is asking for a coke. But the effects of the ad that have been observed are far beyond that.

This ad also helped in the promotion of upcoming season of Coke Studio, i.e. season 9. It also reminds us of the great legendry singer of Pakistan Noor Jahan and her beautiful voice. The most amazing part of this ad more than 80% of Pakistan’s population never knew that Noor Jahan ever sang a song for Coca Cola.

From the very start Coke Studio has been liked by the majority in Pakistan and now with the passage of time it’s getting more and more fame even in abroad as well. It also promotes the idea that how effective and soothing music is and it can also be helpful in many ways. Music is not just a part of enjoyment and entertainment rather it also brings people closer.

Another effect of the song that can be seen is that more and more people are playing music and enjoying it with coke. So, the greatest effect that the ad has casted on the lives of its viewers can be stated as “Share a Coke and bring Harmony and Peace in Society”.