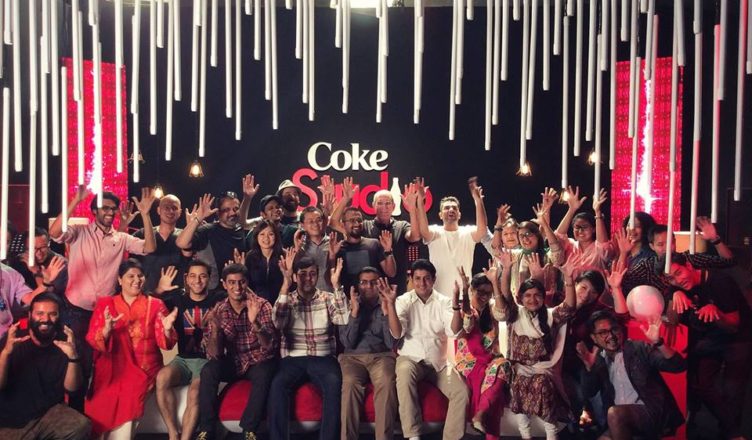 From the very start coke studio has been very much famous not only in Pakistan but also among the Pakistanis living abroad. Till now, there have been nine seasons on air. But this time Coke Studio has introduced something unique and amazing. As, the deaf were not able to listen to the previously on aired seasons of Coke Studio, this music show created a unique experience for the deaf people.

This setup is for the first time invented by China and is installed in Bangkok, and is tested by Coke Studio first. So, the setup that was invented to create a world free of barriers among deaf and normal people is experienced and widely introduced by Coke Studio.

For the creation of this experience, LED lights were used by the music show. With the help of LED lights the experience of music was presented in a visual form instead of the audio one.

An LED screen is displayed in front of the sofa for this experience. These LED lights and the sound of the songs being played are synced. To enhance the visual experience, the LED lights around the sofa present a synchronized mood effect to the viewers. As a result, the audience can experience the music in the visual form by the Visual effects of LED lights.

In order to add to the overall ambience of this experience, the studio was propped with guitars, drums and other musical instruments.

For this first experiment that was held in Bangkok, a group of eight deaf students and faculty members of a hearing impaired school were selected by the team. They were asked to have this firsthand experience with this newly invented musical structure and share their feelings about it.

The inventors and Coke Studio team was also excited about this first experience of deaf people with music.

The group not only experienced Coke Studio but also the music for the very first time in their life.

As it is believed that,“Music is Food for Soul”.

The results of this experiments conducted were outstanding and appreciating on the part of all. The deaf participants felt the magic of music for the first time and they were amazed and pleased to have such an interaction with the auditory world they had never experienced.

All around the world music is used to bring people together. Having the same motto, Coke Studio has planned to acquire the system for a long term to create such a world without barriers in Pakistan a well. The General Manager of Coca Cola Pakistan stated that he aims to shrink the social barriers and to encourage the sharing of experiences and emotions.

“The major motive of Coca-Cola is to bring people together. Such initiatives will help us to promote the brand, but will also offer the lesson of equality and prosperity among the people. It will shred the social barriers by encouraging people to express their feelings and experiences with the outer world. There are millions of people who are unable to hear will also be the part of our effort now. We are glad that they can experience the magic of coke studio now.”

It is an old saying that music is food for the soul and undoubtedly, this is true. It would not be wrong to say that music is something that offer soothing touch to our soul. Recently, COKE STUDIO took a positive initiative in the form of music for people who cannot hear and experience music.  No other music show in the Pakistan reaches to the level of Coke Studio use to enjoy nationwide. However, still millions of people miss out this experience every season.

Coke studio for the deaf enables individuals that cannot hear the music to experience the basic of music. In coke studio for deal people, there is an exclusive sofa and couch embedded with different shimmery LED Lights and vibration engines that are amazingly synced with the sound of the played song. An amazing LED installation around the sofas gives synchronized inclination lighting to lift the experience outwardly. Lastly, an LED screen before the couch shows the video playback, the studio propped with guitars and a drum unit and a console on a stand adding to the general setting.

The setup started in China was initially tried out by the Coca-Cola brand group not long ago when it was introduced in Bangkok. The team of eight members of the Deaf Reach School was taken to Bangkok to experiment with the framework directly. The members really experienced Coke Studio for the very first time in their entire life. Coca-Cola Pakistan chose to gain the framework for long haul use in Pakistan to empower more deaf individuals to experience Coke Studio music. The framework is required to achieve Pakistan soon.

Last but not the least; the founder and director of the Deaf Reach Program Richard Geary, endorsed the partnership for 30 years in Pakistan. He said:

“Our bonding with Coke Studio shows our positive approach towards taking new initiatives. This time, we started this collaboration for the deaf people to open new dimensions for them. Our purpose is not only to let deaf people experience music, but to create awareness from the main audience for such people by helping them to understand the problems and challenges of life confidently”.

Hopefully, this new invention and this new innovation by Coke Studio in music industry is going to play a great role in the deconstruction of social and individual barriers among deaf and other normal people. This will also help in creating acceptance and awareness related to such marginalized people in our society.