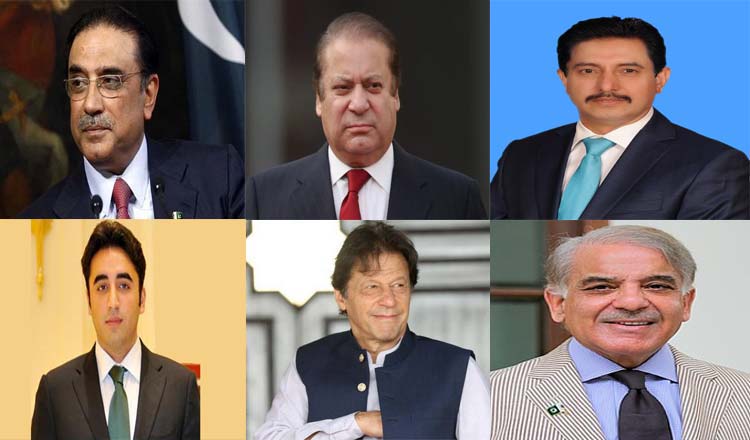 Worth: Asif Ali Zardari has the assets worth of 1.8 billion dollars, making him the richest politician.

Assets & Property Business: He owns 32 Benami companies which are alleged too. Other assets include sugar mills and cement factories. Even before he was a politician, he started to make money from sugar mills across the country. This is not just it, there are several other properties and businesses that he owns in UAE, Manhattan, Normandy, which are not included in the calculation either.

Mian M. Nawaz Sharif was the former Prime Minister of Pakistan and served the country for three continuous years. And he is also a leading businessman in Pakistan.

Worth: Nawaz Sharif has a net worth as high as $1.4 billion.

Assets & Property Businesses: This net worth is not including the whole properties and businesses which he possesses in UAE, USA, and England. But he is the director of the Ittefaq group and Pakistan’s leading steel producers. Sharif’s family also invested in food, sugar, transportation, and other industries. The other source of income includes the Sharif group and the real estate business.

Worth: Bajwa tops the list of billionaires with a net worth equal to 3 billion rupees.

Assets & Property Business: He owns agricultural land worth millions of rupees and also different commercial and residential properties of 29.5 million worth. Not only in Pakistan but has he also had a building, nine houses, and business of millions of dirhams in Dubai and also a million worth of liabilities there.

Bilawal is the son of late Prime Minister Benazir Bhutto and Zardari, the chief of Pakistan People’s Party. He is the richest Pakistani politician.

Worth: He is the most famous billionaire with the assets of a net worth of 1.54 billion rupees.

Assets & Property Business: He used all the money inherited to increase the loans across 1.24 billion and avail them in four companies present in Dubai and the UK. The inheritance was 10 jewelry sets and 7 watches plus one flat from his mother. With his investment, he also announced that the Dubai Iqama is now included in his assets too.

Imran Khan was an international cricketer and brings the world cup to Pakistan in 1992. Now he is the current Prime Minister of Pakistan.

Assets & Property Businesses: Imran Khan possess 14 properties across the country and four foreign currency bank accounts. He owns a mansion in Bani Gala which is worth the million. He was also an investor, investing in various businesses. Khan also owns agriculture land of 39 kanals in Islamabad and 53 canals in Khanewal whereas inherited 363 canals of agricultural land. Other assets include furniture and livestock.

Another son of the Sharif family, Shehbaz Sharif was the president of the PML-N party and a brother of former Prime Minister Nawaz Sharif.

Worth: He possesses assets worth 670 million rupees.

Assets & Property Business: Shehbaz, with this many worth assets, has invested some it in here and some abroad too to increase the wealth as much as he can. He has a bank account in London and two properties there too of worth 146.8 million rupees. And also has properties in Pakistan worth14.7 million rupees. He is the joint owner of the Iteffaq group and also of a multimillion-dollar steel conglomerate.

Omar Ayub is the grandson of Marshal Ayub Khan the former president of Pakistan. He is a member of the National Assembly of Pakistan and also the current Federal Minister for Energy.

Worth: He has declared having assets worth Rs. 1 billion, making his way into the top 10.

Assets & Property Businesses: His assets include agricultural land worth 17 million and other property lands are in Pindi, Jolian, Hattar, and Chitri. He owns three bungalows and a plot in Abbottabad and three vehicles worth 2.1 million rupees. Omar also has his shares in state life insurance and many other popular companies.

This is not just it, many others are out there owning millions and billions of rupees and countless properties with no one to answer to.