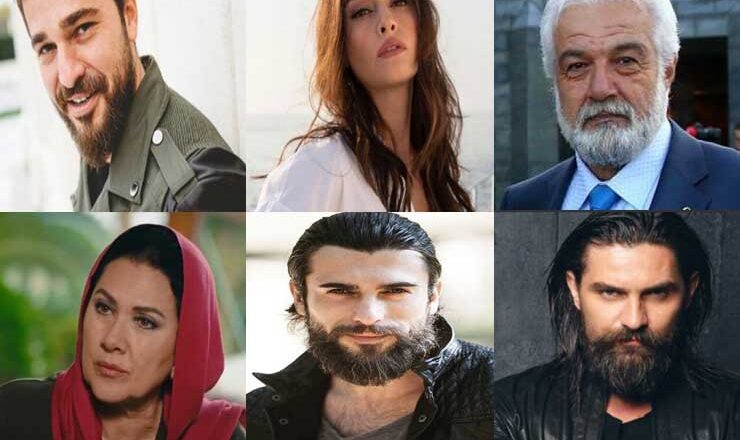 Ertugrul is a popular Turkish Drama that seems to be the talk of the town these days. Based on the life of a brave and victorious warrior belonging to the Kayi Clan, the drama began airing in Turkey in December 2014. Pakistan’s prime minister Mr Imran Khan happened to watch the series and ordered PTV to dub the drama in Urdu and air it for the public to see.

The series soon won the hearts of viewers in Pakistan and even ranked the top watched series on Netflix. Viewers not only fell in love with the storyline and plot but seen to be head over heels in awe of the actors as well.

If you are also a fan of Ertugrul and want to find out more about the cast, keep reading! We will be sharing the real names as well as the past work history of all your favourite cast members from the much loved Ertugrul!

The leading role in the series i,e, the role of Ertugrul has been played by the renowned Turkish actor Engin Altan. The 41-year-old actor belongs to the Turkish province Izmir and comes from a Pritina immigrant family. He has not only played plenty of roles in television series but has also graced the big screen with his presence. He has been happily married for the last five years and is father to a beautiful boy named Emir Ayas Duzyatan.

It can be rightfully claimed that Halima Sultan’s character is among the most loved and acclaimed characters from the series. And rightfully so since the beautiful actress Esra Bilgic has done justice to her role as the wife of the victorious Ertugrul Ghazi. Ertugrul was her debut television series. Before this role, she was mainly a model. However, the success of her character has won her plenty of other leading roles in much other television series. She even features in a couple of Pakistani television advertisement campaigns.

Suleyman Shah is the father of Ertugrul Ghazi. The role has been responsibly handled by Serdar Gokhan, a popular Turkish actor who has been in this field since quite some time. Not many people know that he started his career as a painter and has also produced a number of films under his company “Istanbul Video’s” banner. His first television appearance dates back to 1971. Therefore, it is obvious that Serdar Gokhan was the perfect choice for the role of Suleyman Shah, the leader of the Kayi Clan.

Hayma Hatun is the mother of Ertugrul Ghazi and the wife of Suleyman Shah in the television series. The role has been skillfully played by Hulya Korel Darian. She is a veteran Turkish actress who has been working since the 1970s. She has played several roles in different television series throughout her career that spans over nearly five decades, but her depiction of Hayma Hatun on-screen received a lot of love and acclaim from viewers.

Turgut is one of the three main alps and companions of Ertugrul Ghazi. The character has been played by Cengiz Coskun. Cengiz began his career as a model in 2002 after he won a modelling contest in London. The 38-year-old actor has been gracing the television screen both as an actor as well as a model since then. He has not only acted in television series but has also played a number of roles in films.

Nutrition Sonmez skillfully played the role of Bambi Beyrek in Diliris Ertugrul. He graduated and majored in Mining Engineering. After graduating, he attended acting school and stepped in the field in 1999. He had been acting since then, but he got the recognition after the role of Bambi Beyrek. The fans of the show acclaimed his talent so much that he also bagged a role in the sequel of Ertugrul titled Kurulus: Osman. Other than acting, Nutrition is also very passionate about learning and teaching martial arts.

Didem Balcin was chosen to play the role of Selcan Hatun, i.e. the adoptive daughter as well as the daughter-in-law of Suleyman Shah. Both her parents come from the entertainment industry. Her father worked for radio while her mother competed in a couple of beauty pageants. She started her career by acting in some television commercials and later made it to television series. She also owns an Education Consultancy in partnership with her sister.

The role of Dogan Alp, the blood brother of Turgut Alp and Bamsi Byrek has been beautifully played by Cavit Cetin Gunner. He has graduated as a theatre actor and has always been passionate about acting. It was during his university time that he was offered his first television commercial that marked his debut on screen. He has appeared in numerous commercials, tv-series and movies and is acclaimed for his excellent performance and professional portrayal of the role of Dogan Alp.

The wife of Turgut Alp aka Aykuz Hatun has been reflected on screen by the popular Turkish actress Hande Subasi. She won the Miss Turkey competition in 2005 and has been working as a film actress since 2006. Her role as Aykiz Hatun was highly appreciated, and she was acclaimed for her authentic and true depiction of the historical figure.

Gokche Hatun is another powerful female character from the show. She has been played by the award-winning actress Burcu Kiratli. She has been playing small roles in theatres since her university life and has always been passionate about acting. Her career spans over nearly seven years with noticeable roles in both television as well as the film industry. Her portrayal of Gokche Hatun was also well received by the audience, and she was praised for her remarkable performance.