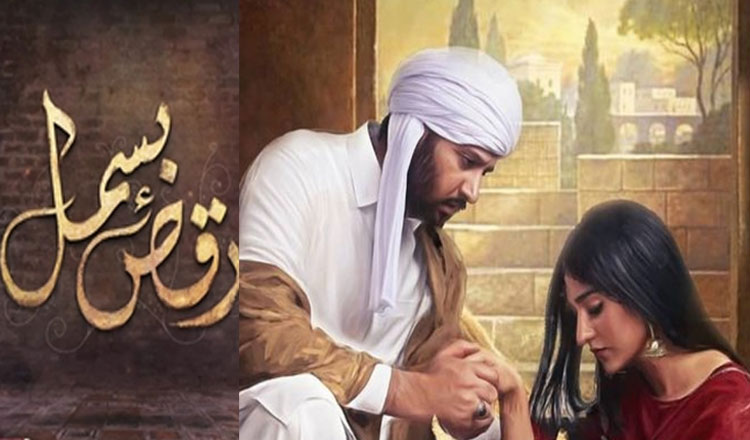 2021, judging by the dramas currently on Screen, is off to an excellent start. Though the lineup for the first quarter is remarkable, the most moving drama with its star-studded cast is Raqs-e-Bismil (Dance of the Wounded). The shows quite rarely live up to the hype preceding them. Raqs-e-Bismil is a nice exception to this law. The strongest HUM TV drama series, penned down by the experienced writer Hashim Nadeem and directed by Wajahat Rauf, is undoubtedly his few episodes down. This serial is shot with great beauty and is made of amazing story, a strong plot and incredible performances. The show has a talented cast that leads Imran Asharaf and Sara Khan. In addition to Anoushay Asharaf, Mehmood Asalam, Nida Mumtaz, Javeria Abbasi, Furqan, Gul e Rana and Saleem Miraaj, Raqs e Bismil seems to have the Internet sensation Momin Saqib.

The play begins with a strong touch, with two brothers Moosa and Essa being introduced to the Peers family. Moosa is depicted as Gaddi’s heir and a hot-headed man. On the initial point, he drags her cousin Sakina out of a spot where she and a guy she loves are about to have a Nikkah. Since Moosa believes a Syed girl is not allowed to marry a non-Sayed, he’s too hard on punishing her.  Sakina’s mom begs Moosa to leave her. She does that by offering her sake of her milk, claiming she’s his Razaee maa.

Moosa’s father The Peer agrees to marry Sakina and Essa in order to keep their honor preserved. Since his childhood Essa had a feeling of love and affection towards Sakina. Therefore he agrees to the decision of his dad. Essa is a gentle heart and kind man, when compared to his brother Moosa. Furthermore, on her wedding day, Sakina curse Moosa that he might also love someone so he could endure the pain of not having his loved one.

When story moves forward, it seems like Moosa is attracted by a girl Zohra wearing a veil in the bus. The perfect girl of Moosa is the one who is highly religious and never seen by anyone. While seeing Zohra Moosa is attracted towards her.  This strange turn of event turn Sakina’s curse into reality. Heart of Moosa is breached when he sees the truth of Zohra. She is an escort, and dances at parties in order to earn a living for her Anna Jee. Moosa’s passion for that girl, however, has not to slow down by Zohra’s reality. He’s quite motivated to have her at all expenses.

Zohra is shown as a stubborn girl. She refuses to marry Moosa. According to her Moods still had to prove to her and first had to win her heart. Moosa, crazy is her love, drops her home politely. Meanwhile Anna Ji called a police officer already. Policeman visits Peer Sahab. After this unwanted visit Peer Sahab recognized the whereabouts of his son and make harsh decisions.  Moreover, he advises the policeman to shoot him if necessary for he disowns him. This whole turn of event is quite disturbing for viewers however Sakina seems to enjoy this in the fire of her revenge.

As a character, Zohra is quite mysterious. Any time she’s in those parties, she just doesn’t want to be around these vain people. Once again her discussions were more or less similar around the men hosting her. Zohra wants nobody to judge her, but she herself has a lot of judgments. She also said she didn’t like doing this job but she just did it to satisfy Ana Ji.

On the other hand, Moosa seriously took the challenge and tried to persuade his mother to go to the house of Zohra. Moosa’s tragedy was represented so well on screen that you can only lament for him. Furthermore, the fact that most dialogs demonstrate clearly how surprising this move is for everyone helps you to cope even more with his situation.

Interestingly, not only has this drama one intense love tale, but many. Murad, Sakina, Sitara, Moosa, Esa or Shehryar all have an ongoing love scenario. Where their circumstances are nothing other than perfect.

The drama is distinguished not only for its writing but also for its sharp direction and filming. The history of Rauf’s movies really shines because the drama is exquisitely filmed. From each shot, viewers do see the technical skill, the choice of places, and even the selection of wardrobe. Initially, the audience was moaning about the drama’s faded color, but as the story went on, they understood that Rauf’s decision was calculated. In comparison to some people who come together to state lines on a set, everything makes the drama more believable.

Saqib, who seemed to have had trouble with his attempts at letting go of his natural accent, appears to have relieved himself in his role. He adapted magnificently to the position of Essa and showed promising growth as an artist. Abbasi, in all her scenes, is excellent but it seems as if her character is more dramatic. Javeria Abbasi, who plays the mother of Sakina, is highlighting her role as she plays for the first time the part of an older lady.

A more optimistic role is played by Nida Mumtaz, who always takes the vengeful mother figure in Pakistan’s drama. Mehmood Aslam, Moosa and Essa’s father, is another powerful actor in the team. This is amazing to see his transition to Peer Qudratullah Shah from his most famous role as the foolish Mehmood Saab of ‘Bulbulay.’ His appearance in some scenes makes the audience shudder in his presence with dread. Gul-e-Rana is another senior actor with the ability to play any part, and Anna Ji is just a delight.

This is what audiences desired for a long period of time: the performance, direction and production all converge in a fascinating story about love, duty and destiny. Even if the story dropped later, Raqs-e-Bismil will still remain mesmerizing due to the great quality of the production process and the good performance of the actors. It is hoped that Raqs-e-Bismil might be a chance for other production houses and television channels to learn and replicate its professionalism and care in other shows.