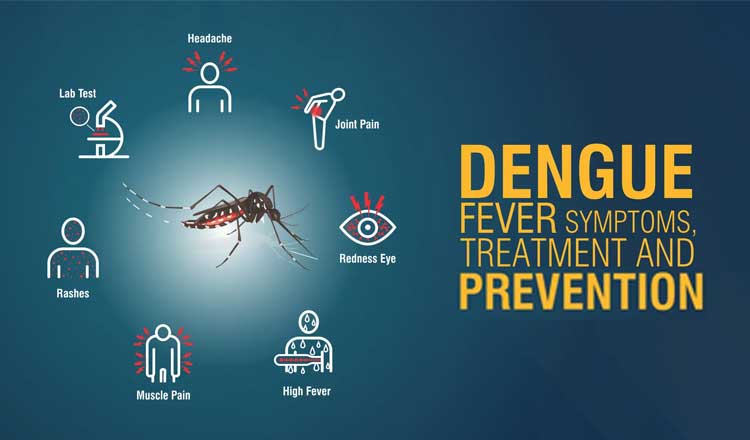 Dengue Fever or generally known as Dengue is a mosquito-borne acute viral sickness that has emerged as havoc over the globe. About 50 million new infections and 22,000 deaths are recorded every year, and nearly 2.5 billion people are at risk.

Dengue fever is an acute disease carried by the Aedes mosquito, which is caused by an RNA virus belonging to the family Flaviviridae. There is a wide spectrum of symptoms that can accompany a fever, from no symptoms at all to life-threatening complications including hemorrhagic fever and death.

When a person is infected with a DENV strain that was not present during their initial infection (termed secondary or heterotypic infection), they have an increased risk of developing severe dengue. In this way, those living in regions where several different DENV strains are circulating at once are the most likely to become severely ill. Protection against viral sickness caused by re-infection with a specific strain of DENV is long-lasting after initial infection. The cross-protection offered by infection against the other 3 DENV strains, however, is only temporary.

A high body temperature (40°C/104°F) followed by 2 of the symptoms listed during the acute phase (2-7 days) should raise suspicion of dengue:

Usually, between days 3 and 7, a patient reaches what is considered the crucial phase of their disease. Some patients may experience an acute worsening of symptoms during the crucial phase’s first 24 to 48 hours. Danger signals of severe dengue can appear when the patient’s temperature is falling (below 38°C/100°F). Plasma leakage, fluid accumulation, respiratory difficulty, severe bleeding, or organ dysfunction are all potential causes of death in patients with severe dengue.

Indicators for medical attention include:

Patients exhibiting these signs during the crucial phase require close monitoring over the next 24 to 48 hours to ensure they receive the care they need to avoid further problems and perhaps death. It’s important to keep an eye on the patient even as they’re recovering.

Dengue fever is transmitted by one of 4 dengue viruses. You can contract dengue fever when bitten by a mosquito carrying the virus. Both the infection and your body’s reaction to it might make you sick.

The virus can eliminate components of your plasma that help in clot formation and vascular structure. Internal bleeding can result from this and other immune system substances that cause blood vessel leakage. The result is potentially fatal dengue symptoms.

Dengue treatments are limited to symptom management, as is the case with the vast majority of viruses. Possible components are as follows:

You can prevent dengue fever using the following preventive measures:

Protection from mosquito bite: In areas where dengue is endemic, avoiding being bitten by mosquitoes is your best defense against getting infected. Wearing light colors and using insect repellent, along with installing window screens and using mosquito netting, can all assist.

Elimination of Mosquito Breeding Grounds as a Source: Preventive actions are frequently targeted at reducing Aedes females’ egg-laying sites, a strategy called “source reduction.” Everything which holds water can be used by Mosquitoes for egg laying, from plant saucers to rainwater barrels and potholes. It’s important to cover water supplies at all times. Empty and  lean the water containers frequently to check mosquito growth.

Protecting against Dengue with a Vaccine: The DengvaxiaTM vaccination is only advised for those who have already contracted dengue. You may be less likely to develop dengue hemorrhagic fever (a severe form of dengue) if you get vaccinated against the virus.

If you’ve never had dengue fever before, you probably don’t need the vaccine. Getting vaccinated before contracting dengue for the first time can raise your chance of developing severe dengue because having the virus once increases your likelihood of becoming sicker if you contract another strain.

Vaccine development against dengue disease is now underway. You can prevent dengue by adopting safety measures and minimize the outbreak of infection massively.

If you experience any dengue symptoms and you reside in or recently visited a dengue-prone location, get in touch with your top general physician right away.

1. Who is vulnerable to dengue fever?

2. What is the first stage of dengue?

After a mosquito bite, dengue fever symptoms can start to show up four to ten days later and linger for three to seven days. Severe dengue will occur in about 1 in 20 dengue patients after milder symptoms have disappeared.

To get accurate treatment, it is better to consult a doctor expert in infectious diseases Dengue hemorrhagic fever/dengue shock syndrome patients who are experiencing severe hemorrhagic symptoms or shock may benefit from consulting with an intensive care medicine specialist.