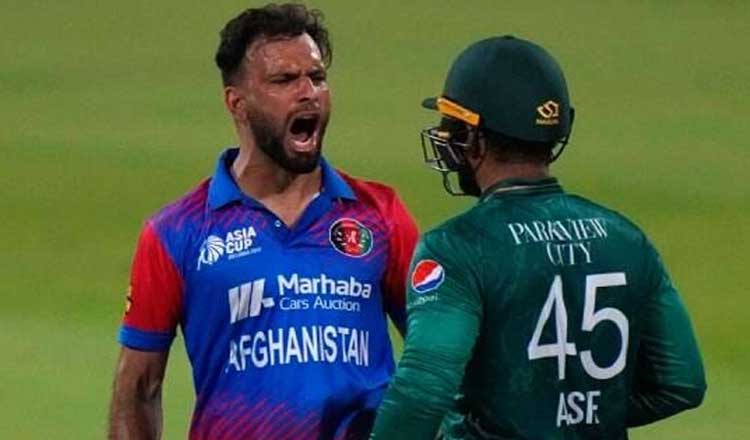 In a cricket match, Pakistan and Afghanistan went haywire after one player taunted and the other tried to whack him with the bat.

Asif Ali is still in hot water as ICC has summoned the two for a ban.

It all happened in an action-packed match between Pakistan and Afghanistan in the super 4 of the Asia Cup. The match went down to the wire after Pakistan seized victory from the jaws of Afghanistan.

Courtesy of twin sixes by Naseem Shah in the last over, Pakistan has advanced to the finals.

In this high-voltage match, Pakistan’s Asif Ali and Afghanistan’s Bowler Fareed Ahmed caught up in controversy during a tense stage in the match.

Asif Ali Pakistan Bastman might be handed a two-match ban for his undisciplinary conduct by the ICC.

Fareed Ahmed heated the arena with foul taunts after Asif Ali raised his bat to smack him out of the ground. The two then took the gloves off and heatedly exchanged words before the umpires intervened and calmed things down.

Asif Ali and Fareed Ahmad have been summoned by Pycroft, the ICC match referee, for a hearing, after this incident during the match.

Asif Ali may get banned for two matches over this whole drama. Pycroft has said he will be taking action against any player found guilty of breaching the code of conduct. Observing the entire scenario, he also said that the players must appreciate the umpires’ decision.

Our resources have raised the alarm about Pycroft’s unsparing discipline. Pycroft has banned several players in the past for disciplinary action. It is much expected that Pycroft will serve both players with severe penalties.

It remains to be seen whether Asif Ali will face any further action after the Asia Cup 2022 for his latest outburst.

Pakistan is to meet Srilanka this Sunday in Asia Cup 2022 final, and it will be a massive drawback for Pakistan if Asif Ali misses the match because of his ban.

The Pak-Afghan cricket rivalry is one of the most ruthless rivalries in the sport. It is not to be forgotten that the two countries share a long, rich history.

The matches between Pakistan and Afghanistan are always highly anticipated, and they often fascinate large crowds. The Pakistan team has traditionally had more success in this rivalry, but the Afghan team has shown improvement in recent years.

The rivalry is mirrored off the field, with supporters from both sides regularly engaged in verbal battles on social media.

However, there is also healthy respect between the two sets of fans, and the matches are always well-attended.

Despite the tension, the cricket rivalry between Pakistan and Afghanistan is one of the most entertaining in the world.